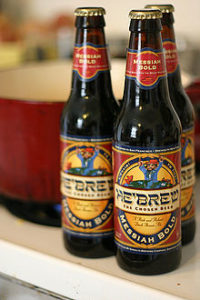 In the craft beer explosion, there have arisen many questions when it comes to kashrut (kosher considerations) of beers out there. While beer, in and of itself, is not inherently problematic (in fact, the rabbis of the Talmud are more concerned with intermarriage than the inherent kashrut of the beer, itself, with gentile-produced beer), there are still many questions and potential concerns with craft beer.

Of course, one can find some beers that are certified as kosher (e.g. many beers by Sam Adams (by Star-K), many beers by New Belgium (Scroll K), and all beers by Shmaltz Brewing (KSA)), but other breweries and beers are not automatically non-kosher.
In fact, most beers will most likely not meet any problems for kashrut. However, there are many issues that do arise and can be potentially problematic.

One problem that arises are breweries that are owned by Jews, yet do not sell their hametz on Passover, which would be problematic for those beers whose grains were owned by the breweries during Passover.

Another significant problem are beers with pork or shellfish in them, which are absolutely not kosher.

Here is a list of common kashrut issues with beer people may encounter:

For more on recent developments in craft beer for kosher-concerned consumers, check out the 13th episode of The Jewish Drinking Show:
Here is a list of kosher-certified beers at Boulevard Brewing:

This page is currently in development, so stay tuned as this page builds up🍺🍺🍺