A new book recently came out that makes for a fascinating resource for educators teaching Rabbinic literature. Intended for college courses as an introduction to Rabbinic literature Jordan Rosenblum’s new book, Rabbinic Drinking: What Beverages Teach Us About Rabbinic Literature, has various chapters which could be separately assigned as part of course readings for such courses on various aspects of rabbinic thought. 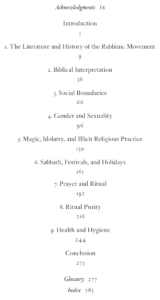 Content of Chapters
In addition to chapters on social boundaries, gender & sexuality, magic, idolatry, & illicit religious practice, Sabbath, festivals, & holidays, prayer & ritual, ritual purity, and health & hygiene, Rosenblum’s book also has chapters on Biblical interpretation and literature & history of the Rabbinic movement, which are helpful for those new to engaging with Rabbinic literature. Throughout his book, Rosenblum cleverly positions these various topics of interest as rabbinic drinking. This perspective yields a fastening turn-of-phrase which I delight at: looking through the rabbinic drinking glass. This is not merely a clever phrasing, but it’s a remarkably useful and entertaining device that works very nicely.

Helpfulness for Students and Teachers
As it is intended primarily for college students taking an undergraduate course, it is not a footnoted work, favoring in-text citation, which makes for a smoother read. What is helpful, however, is that, at the end of each chapter, Rosenblum suggests various readings for further delving into the topics touched upon in the respective chapters. The style that Rosenblum employs is one that is meant to engage with a younger, and non-specialist audience, and playfully injecting not only popular cultural references, but also adhering to a style that is less dry (pun somewhat intended) than typical academic writings.

Helping Further Develop Literature on Jewish Drinking
What I think is particularly novel about this book is that, while it really focuses on rabbinic thinking, it very much is done through drinking, which is something I welcome here at JewishDrinking.com. There is no shortage of rabbinic texts involving drinking and Rosenblum has only begun to scratch the surface of all the content that exists within rabbinic literature concerning drinking. One thing that I hope is that it provokes people to consider scholarship and to develop further scholarship on the topic of drinking in Jewish texts, in general, and Rabbinic literature, in particular. That isn’t to say that such literature doesn’t already exist, as you can check out this page where I’ve been listing secondary literature about drinking in Jewish life, history, and culture. I hope that it helps propel further scholarly consideration concerning Jewish drinking amidst the field of rabbinic literature.

Further Applauding
Speaking of further developing drinking in Rabbinic literature, one thing that I think is particularly good and helpful is Rosenblum’s translation of משתה (mishteh) on pp. 208-209, which Rosenblum and I both agree has, for far too long, been translated as “a wedding feast”: “Rendering this simply as ‘wedding feast’ misses the fact that weddings are understood to be times of celebration and, as the very words themselves attest, drinking” (208), Rosenblum rightly argues. While sometimes, משתה can be a wedding party, it isn’t always such an occasion. This is something that I worked on in October 2018 in the form of a Sefaria source sheet on משתה in the Mishnah and Tosefta, as well as a Sefaria Source sheet on בית המשתה in the Mishnah and Tosefta in September 2018. I’m very happy to see his argument for translating this term as a “drinking party”, even though I typically translate it as “drinking event”. The teeny-tiny difference between our translations is how much is a gathering of people who are drinking to be considering merely an event taking place, or is it when drinks are involved, that it is always a party? I’m okay leaving this unresolved.

In his section on Havdallah (pp. 163-166), Rosenblum does a nice job in describing how beer was debated for use in Havdallah, with a particularly fascinating excursis on the names of the sons of Rav Hisda (163-164), which was really insightful.

Criticisms
While there a lot of good things about this book, I do have some issues with it. A small issue I have is referring repeatedly to Rashi as a “reputed winemaker.” While the first occurrence (31) is fine to mention as it is a neat speculative association with drinking regarding this Medieval sage, the subsequent mentions (53 and 101) seem simply gratuitous (especially since the claim lacks substantial basis).

One line of the book that amuses me is intended as a direct response to the ongoing Facebook conversation that Rosenblum and I have had, which has been ongoing since mutual friends put us in-touch three years ago, which has been mutually beneficial about beer (and drinking, more broadly, in rabbinic literature). While there is a textual emendation I would like to take credit for (165), one line of the book is Rosenblum responding directly to a conversation of ours concerning the Rabbah and Rabbi Zeirah Purim drinking incident (Megillah 7b). Rosenblum argues that the story “serves to moderate Rava’s assertion” (189), whereupon Rosenblum parenthetically states “While Rabbah was Rava’s teacher, we should not expect that he shared with his students a personal story in which he drunkenly kills his friend” (189). Why not? While I don’t mind Rosenblum staking out a position in direct opposition to mine in our speculation in this sugya, I would have liked for him to have provided some sort of reasoning behind this claim rather than simply rejecting it out of hand. (Again, I don’t mind my arguments to be rejected, I just want to see some justification.)

In his section on “Prayer Missed Due to Drinking” (207-210), Rosenblum includes Shema as a prayer and mentions that a couple of rabbis missed Shema, as “they either forgot or were unable to recite the evening Shema’; or, in line with what we learned in the previous section, did not do so, since praying while drunk is an abomination” (210), yet the rabbis had a prayer and Shema is not considered prayer. Yes, I understand that both are what we consider as liturgy, but the rabbis did not consider Shema to be prayer as such.

I’m not sure Rosenblum understands what new wine is when he describes “new wine” as being in “its full, unadulterated potency” (249) compared to diluted wine. In truth, diluted wine has alcohol content, while “new wine” is what we would call “grape juice”, as wine takes time to ferment. This would have helped his discussion of delirium tremens (248-250) as indicating that someone who is drinking new wine would be experiencing alcohol withdrawal symptoms.

Biggest Criticism Has Nothing to Do with Drinking
My biggest issue with Rosenblum in this book has nothing at all to do with drinking. It has to do with his claim that the rabbis espoused a system with six genders (122-123). While Rosenblum claims from that source that there are six, the problem is that the source that he cites for this claim actually specifically mentions that the rabbis worked off of a dual-gender system: “Rabbinic legal thinking, which provides much of the structural framework of subsequent Jewish cultures, aims first and foremost at instituting a rather pronounced dual gender grid, imposed on the social organization of Jewish society as the rabbis envisioned it. Most of the individual laws of rabbinic halakhah apply to either men or women. Differently put, in rabbinic legal thinking, it is almost always important whether the halakhic agent is a man or a woman” (271), as well as in her conclusion, she writes “In fact, we have to take note that the rabbis maintain a legal system with a dual-gender grid in spite of ambiguous bodies” (289). Rosenblum obfuscates sexual identity with gender from that article, which is a woeful misreading of the article. Moreover, I do not understand where Rosenblum would derive two of these categories to be genders, as I’ve argued elsewhere that two of these six categories, the אילונית and סריס, are not separate genders, but categories of infertile people.

Conclusion
Despite my criticisms, Rosenblum’s Rabbinic Drinking is a helpful work, not only for those in academia, whether on the teaching side or student side, but also for those looking for an amusing and non-dry perspective of Rabbinic literature (yes, pun intended on the dryness). Moreover, for those interested in drinking in Jewish text and tradition (such as readers and listeners of JewishDrinking.com’s content), this is a really neat read, which you can easily enjoy while quaffing whiskey, wine, beer, or whatever may fit your fancy.