While The Jewish Drinking Show is the leading podcast dedicated to topics related to Jewish drinking, it is not the only one to feature episodes on Jewish drinking topics. 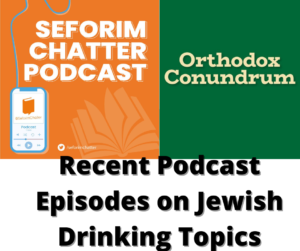 Published a few weeks ago, the 104th episode of Orthodox Conundrum, “Problematic Behaviors in Yeshiva High Schools: Binge Drinking, Gambling, and More” features Rabbi Tully Harcsztark and Dr. Rivka Press-Schwartz sharing their findings from a survey carried out under the auspices of Machon Siach at SAR High School, about these topics. If this sounds familiar, it’s because Dr. Press-Schwartz spoke about this topic on the 67th episode of The Jewish Drinking Show.

A few months ago, Prof. Glenn Dynner appeared on the 29th episode of the 3rd season of Seforim Chatter, discussing Jewish tavernkeepers & the liquor trade in the Kingdom of Poland. Once again, if this speaker and topic sound familiar, it’s because Prof. Dynner spoke on this topic on the 12th episode of The Jewish Drinking Show.

One further episode of Seforim Chatter that discussed a Jewish drinking topic was episode 34 of season 2, featuring Rabbi Dovid Cohen, discussing halakhot concerning beverages, which was published last year. I am currently reading the book that is the featured topic and would love to welcome Rabbi Cohen to be a guest on The Jewish Drinking Show when I finish that book.

If you know of any further podcast episodes out there on Jewish drinking topics, please send them my way at Drew [at] JewishDrinking.com