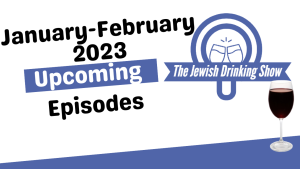 As mentioned on the 120th episode of The Jewish Drinking Show last week, the show will be taking a four-week winter break from publication, resuming in the middle of next month. Here is the tentative schedule for the first two months of 2023:

Stay tuned and please note that these are subject to change.