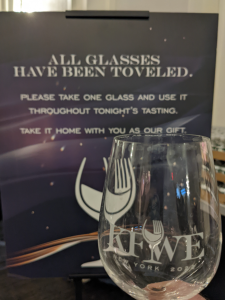 Having heard that Royal Wine’s Kosher Food and Wine Experience was returning to an in-person experience, I was excited to have the opportunity to attend in early March (with thanks to my wife for allowing me to attend, and for the event host to provide me with media credentials). 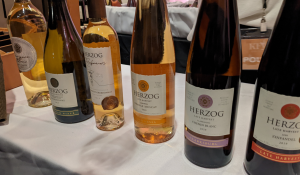 Taking place on March 1st, I flew into Newark airport and headed straight for the hotel in New Jersey where the 2022 Kosher Food and Wine Experience (KFWE) was taking place. After checking-in, I then headed over to the media check-in, where I waited for the line to enter to die down. Upon entering, wine glasses were available.

Having known that this would be a multi-hour drinking event, I decided to fill my belly with tasty sushi first. This turned out to be a wise decision as people were focussed on drinking, so there was no line for the tasty sushi, plus it was a good move to get some food in my belly. While grubbing on some sushi, I asked someone next to me why people weren’t going for the sushi, he said to get Tierra del Sur food, which had some stations set up, was a novelty for these NY tri-state folks. Whereas this sushi was readily accessible for them. Coming from Cincinnati, I was very excited for the sushi. 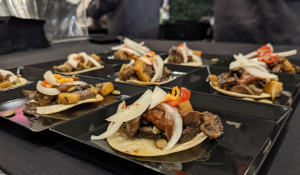 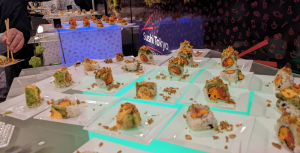 While the sushi stand took center place in this room, it was flanked on either side by two food stands featuring Tierra del Sur offerings. It turned out this room had spirits and liqueurs on one end of the room, while the rest of the room was lined with wines from America. The room across the hallway featured entirely Israeli wineries. 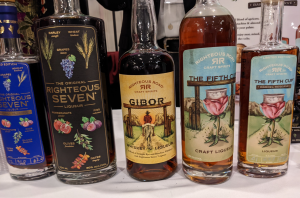 It was intriguing to taste the spirits and liqueurs, including Seven Species, of which the barrel-aged Fifth Cup really stood out for its tastiness. Somehow, I managed to not taste any of the Bourbons, which was unfortunate.

With the wines, I was entirely a fish out of water. Fortunately, I had Mendy Mark, who had been a guest of the show (see episodes #74 and #78), who knew what was what, as well as who was who in the world of kosher wines. It was fantastic to have him serve as my escort and introducing me to various wines and wineries around both the domestic room and the Israel room. Included in this touring was getting to meet various vintners, especially from Israel. 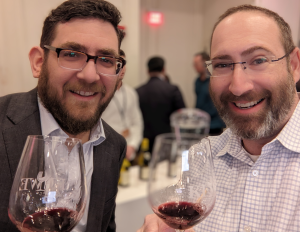 Speaking of meeting people, I got to meet Jeff Morgan and others. I also was introduced to Erik Segelbaum, of whom I had never head, but we connected and, as you can see, ended up being a guest on the 108th episode of The Jewish Drinking Show, which I published last week. I also got to meet some kosher wine writers, which was very neat, such as Josh Londoner and Elizabeth Kratz, and ended up in The Jewish Link pictured alongside them, which was very neat. 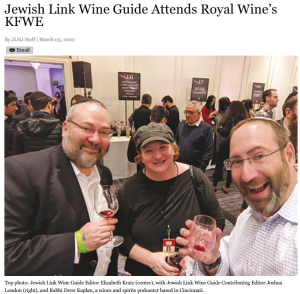 One question caught me off-guard when someone asked me if I was a part of a Rosh Chodesh Club. I had never heard of such a thing, so I asked him, “What is a Rosh Chodesh club?” It turns out it was an invention by Yossie Horowitz, who had the idea of people getting together on Rosh Chodesh to enjoy various delicious kosher wines along with tasty food.

While a couple of the wines were quite remarkable (and I also developed an interest in a winery or two), really, I didn’t have a roadmap or game plan when it came to approaching the wines, although I was really just trying to take it all in. However, what I enjoyed the most about the event was that I got to re-connect with people, as well as get to meet really neat people in the world of kosher wine, as well as spirits and liqueurs, so it was fantastic for networking, as well as to promote JewishDrinking.com to those who hadn’t heard of it.

Having never attended KFWE previously, I had no prior experience to benchmark against it. However, from what I heard people saying, it was a well-laid out event, especially with the two separate rooms for Israel wines and one for American wines. It was a very nicely one event, with plenty of wine, cool people, and delicious food.