How important was beer to 17th century Jews? Apparently, more significant than you or I might guess. In fact, one 17th century rabbi argued that it was significant enough to create a leniency to a Biblical commandment in certain circumstances. 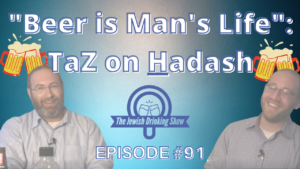 In a comment to Rabbi Moses Isserles’ gloss on Shulhan Arukh YD 293:3, Rabbi David HaLevi Segal wrote that “beer is man’s life” (in his Golden Pillars (in Hebrew, Turei Zahav (or acronymically, TaZ)) YD 293:4, which was first published in 1646). To discuss this topic for the 91st episode of The Jewish Drinking Show, which concerns the Biblical proscription against eating new grains (hadash), deriving from Leviticus 23:14, is Rabbi Ezra Goldschmiedt.

Rabbi Goldschmiedt received his rabbinic ordination from Yeshiva University, as well as a masters degree in Jewish education from the same institution, as well as having graduated with highest honors for his bachelor’s degree there. In addition to his educational background, he presently serves as the rabbi of Congregation Sha’arei Torah in Cincinnati.

In addition to being available on Apple Podcasts, Spotify, Buzzsprout, or wherever you listen to podcasts, the episode is also available on YouTube: